Furries attacking and provoking The Empire Of Chaoland

The Second Furry War is a war that started after peace was made with Poland, both logo editors and chaolandites were happy. However, the furries weren't, so they started to harass and attack Chaogamer, which resulted into a second furry war. The furries made a move by drawing intentionally terrible art of Chao and successfully hacking his twitter account. Afterwards, Chao got his twitter account back and updates are soon to come. They soon started a counter attack by reporting the leader. The report is currently pending.

Chaoland launched an attack on the Leader's channel where the highest ratio was either 6 likes and 8 dislikes or 6 likes and 9 dislikes, they also gotten a supporter of the Leader to switch sides, then later TMAFE decided to join the war. Soon, the Battle of Penguin happened, and then came a hero of the Chaolandites named Wrog. At first, people inside Chaoland were afraid he was going to be like Invers. However, Wrog actually listen under Chao's demands and helped the Chaoland military win a huge victory over the furries and improving the Chaoland military strength. Soon, he was declared a hero of the Chaolandites in Chaoland and was promoted to general.

The furries got very angered, so they did a counter attack by dislike bombing Chaogamer's channel, however, it failed because soon the Chaoland military found out about the dislike bombing and soon defended the video. 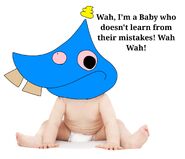 Art made by furries as propaganda to get people on their side.

Retrieved from "https://tmafe-archive.fandom.com/wiki/The_Second_Furry_War?oldid=5853"
Community content is available under CC-BY-SA unless otherwise noted.